Sunday saw many members of our Dublin Adults and Dublin Children’s teams in action at the Wavertree Track and Field Stadium on day 4 of the 2016 British Transplant Games.

Children’s Team:
First up we had Tara and Isabelle in the 50m sprint. Both were in separate, competitive heats and both qualified to the final which was held later in the day. Isabelle came away with a silver medal in very closely contested final (she was o.o1 seconds ahead of 3rd place).

Paul, Ciaran and team captain Jack O’Brien were next up in the 100m. Their age category (12-14 years) was a very busy one and it required 4 heats to give everyone a run. This meant that places in the final were at a premium. All three ran very well with Paul and Jack making the final. Jack came away with a well deserved silver medal as he ran 1st place extremely close.

Ciaran, Isabelle, Paul and Jack teamed up to compete in the 4 x 50m relay. There were two heats and it went on fastest times to decide the medals. Our four sprinters each ran exceptionally well to ensure that they were in the mix throughout the race and Jack anchored the team home to a wonderful bronze.

Tara took on the Long Jump and was an absolute star – one of the officials suggested that she get involved in a club to train for long jump as she impressed with her natural talent!

The morning started with Tony in the Javelin – a new sport for him. With some coaching from Mike, Tony acquitted himself well and enjoyed the technical nature of the event.

Mike also competed in his age category in Javelin. He was very happy with his performance and took a very creditable 4th place in the event. He went on to compete in shot putt and discus in which he took silver and gold respectively with some impressive distances. A couple of PB’s in the throwing events left Mike very satisfied with his day’s work. 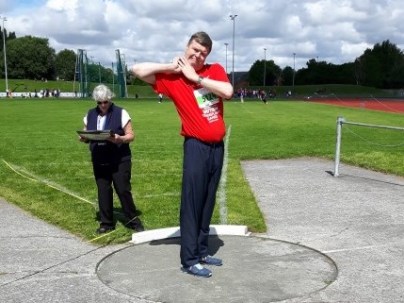 Richard was also involved in the shot putt in his age category. It was a tight competition with some very impressive efforts. Richard was out of the medals going into the last round but he had saved the best for last and eventually took a well deserved silver.