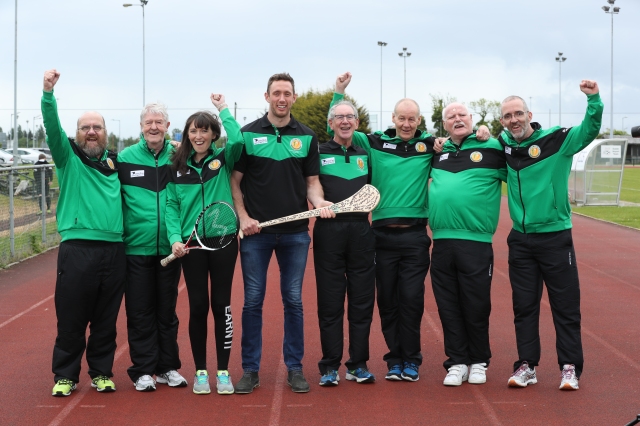 Messages of goodwill abound for Transplant Team Ireland as they get ready to depart today (Saturday evening) for the 21st World Transplant Games in Malaga which will take place from 25th  June – 2nd July.  Joining the Spanish ambassador in expressing good wishes to the 27 strong Irish team were the cream of sporting personalities including Martin O’Neill, Ruby Walsh, GAA’s Mickey Harte, Alan Brogan and David Hickey the former Dublin footballer and Transplant surgeon, the new president of the Olympic Council of Ireland Sarah Keane and Kilkenny Hurling All Star Michael Fennelly.

Ireland soccer manager Martin O’Neill send a video to the team recounting his wife’s illness. Recorded at the Aviva Stadium, Martin O’Neill acknowledged his friend Tyrone Football manager Mickey Harte for approaching him about Transplant Team Ireland. Mr Harte has been a long-time supporter of the transplant team. In his video message Martin O’Neill said. “The games are going to be very difficult.  The obstacles and the hurdles that you have overcome to get there is just amazing. I know plenty of that myself would you believe it or not”. He explained, “My wife had stem cell treatment for non-Hodgkin’s Lymphoma away back about ten years ago. When the chemotherapy didn’t work we had to resort to stem cell. Luckily she had a match with one of her sisters in terms of blood. But the ordeal that she had to go through was pretty horrendous. So I know the sort of things you’ve had to endure – from a distance, I accept that. The very fact that you have had to overcome these shows you what position you are in now. Give it everything you’ve got, absolutely everything. The games are there for you. Just go for it. I’ll be keeping a close eye on you. Good luck to Transplant Team Ireland. I’m sure you’ll be very successful.” (https://www.youtube.com/watch?v=rIz-mXA0Ug0)

Sarah Keane, the President of the Olympic Council of Ireland said, “We are proud that you will represent Ireland at these games and we know the huge effort that you will have  put in as athletes in preparation for the Games. Your message about increasing organ donor awareness and inspiring transplant recipients to get active is an important one that I know the International Olympic Committee supports. Both organisations share a common objective for people to engage in physical activity through the enjoyment of sport.”

Members of the team were guests of the Ambassador of Spain José María Rodríguez-Coso at his residence in Dublin. The Ambassador said, “As we know, Spain is a world leader in transplantation and it fills me with satisfaction to know that my country has been chosen to host the Games. It gives me great pleasure to welcome you to Spain”.

Prof. Jim Egan, the Director of Organ Donation Transplantation Ireland (ODTI) also sent his good wishes to the team saying, “It is such an amazing event for all taking part who share such unique experiences. These games also increase the awareness of organ donation.”

Colin White, the National Projects Manager of the Irish Kidney Association is the Ireland Team Manager and he is also currently the Treasurer of the World Transplant Games Federation.

Mr. White said, “This year the World Transplant Games Federation is celebrating 30 years and we can be proud of the tradition that our team has in the competition. Our team is known for its sense of fair play as well as its sense of fun with both underpinned by a steely competitive edge. Our athletes are coming from across the country and their dedication and commitment is not only to their training, in practical terms, they also fund the vast majority of the costs involved. Their motivation is driven by a determination to be Fit for Life, to show other ‘patients’ what can be achieved post-transplant and to encourage the general public to have a family discussion about organ donation”.

Mr. Colin White said, “We welcome the recent announcement that the International Olympic Committee (IOC) has signed an unprecedented memorandum of understanding with the World Transplant Games Federation (WTGF) affirming that the IOC will help create awareness within the Olympic movement and amongst athletes about increasing organ donor awareness and inspiring transplant recipients to get active sharing a common objective for people to get active through the enjoyment of sport.”  https://www.olympic.org/news/sport-for-all-ioc-signs-agreement-with-world-transplant-games-federation-1?esi=true

“It will be my 7th World Transplant Games as Ireland Team Manager and it continues to be a most humbling honour to be a part of such an inspiring group of people. I look forward to witnessing our four new team members experiencing their first Opening Ceremony, our regular members renewing friendships and sporting rivalries and the support that we will receive from family and friends via our team website www.transplantteamireland.ie   The realisation that all of the competitors at the Games will be there because of the generosity of organ donors, and their families, is a wonderful reminder than there is a lot of good in society!”

Kilkenny Hurling All Star Michael Fennelly gave a motivational talk to the team ahead of the World Games last month. The eight times All Ireland Senior title holder and three times Club Championship winner shared his insights into Kilkenny’s winning ways and his knowledge as a graduate who holds an MSc in Sports Performance from University of Limerick (UL) and who now works as a Lecturer for the Limerick Institute of Technology at its Thurles campus. He said, “It was a pleasure to spend some time with these inspirational athletes who will represent their country at the World Transplant Games. I have huge admiration for each and every one of them. Most of us take our health for granted but these brave people have all faced uncertain futures and battled illness and organ failure. Their determination and great spirit is to be commended in taking on and enjoying competitive sport as a way of keeping fit, celebrating life and honouring their donors. I wish all the members and traveling staff of Transplant Team Ireland the very best of luck and am grateful for the opportunity to meet them.”

Every athlete at the World Transplant Games will have already received a kidney, liver, heart, lung, pancreas or bone marrow transplant.

The Irish team includes four newcomers. Although the main objective for team members is to embrace life and promote organ donation, some returning team members will also be contesting World titles. Keen to build on their medal successes at the previous World Transplant Games in Argentina in 2015, Deirdre Faul, Kieran Murray, Tony Gartland and Peter Heffernan have being training hard in anticipation of the competition in Malaga.  Between them, the much smaller team of four won 13 medals including 7 Gold, 4 Silver and 2 Bronze in Argentina.  Two years previously at the World Transplant Games in Durban, South Africa 2013, the Irish team of 24 athletes scooped 34 medals including 12 Gold, 10 Silver and 12 bronze with 50 competing countries.

Team Captain Harry Ward from Baldoyle, Dublin has represented Ireland at numerous international Games events both as a dialysis patient and in more recent years as a transplant recipient thanks to his kidney transplant which he received in 2007.

The youngest member to the team is 30 years old Rachel Eagleton,  a kidney transplant recipient from Meath, who is returning to the team after taking a few years out to study for her ACCA exams which she qualified for recently.

This will be the first World Transplant Games competition for the oldest member of the team John McAleer from Antrim. The retired university lecturer took part in the European Transplant & Dialysis Championships Games three times before, first as a dialysis patient four years ago and in 2014 and 2016 as a kidney transplant recipient. He is embracing life since being called off a golf course to receive a kidney transplant in 2013.

Also travelling with the team will be Team Medical Director and newlywed, Claire Kennedy, from  Clontarf, Dublin who works in the transplantation department at Beaumont Hospital. This will be Claire’s second time to perform her role as Team Doctor having travelled with the team last year to the Games in Finland.

For organ donor cards Freetext DONOR to 50050 or visit website www.ika.ie/card  You can now download the IKA’s new digital donor card by visiting www.donor.ie on your smartphone. Your wishes to be an organ donor can also be included on the new format driving licence which is represented by Code 115.