A Dublin woman has swam her way into smashing two world records at the 21st World Transplant Games in Malaga. This morning at her final event at the Games, Deirdre Faul a 49 year old liver transplant recipient from Dalkey, nailed down her fourth Gold medal in the 400m Freestyle swimming event with a record breaking time and beating swimmers from Argentina and Israel who came in 2nd and 3rd. Deirdre’s finish time of 6 minutes 27.89 seconds surpassed the previous world record of 6.32 achieved by UK athlete J Coleman in Bangkok in 2007.  Second and third place in 400m event went to transplant recipients from Argentina and Israel. 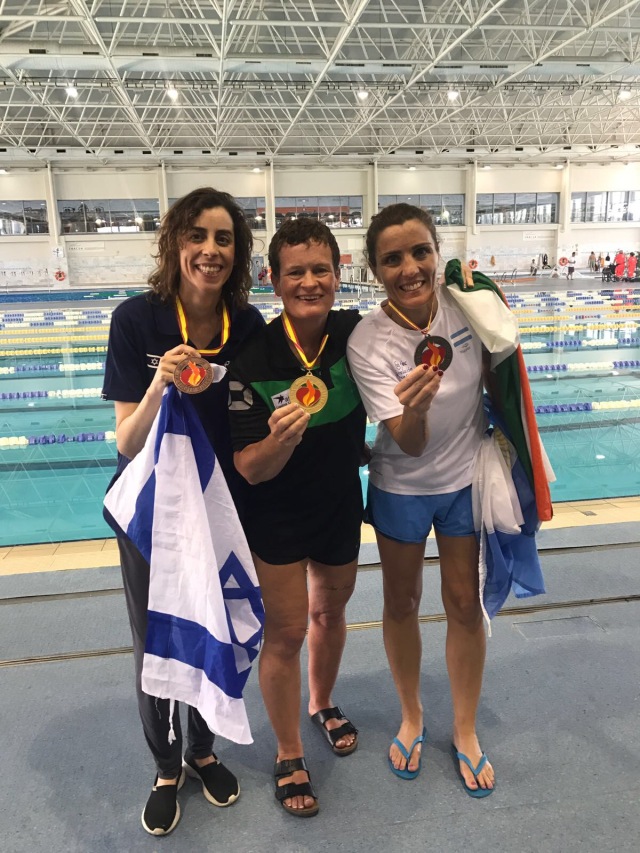 Just yesterday (Wednesday), the mother of two sons, broke a world record in the 200m Freestyle event with a time of 3.01.93 and beating the previous world record of 3.05.08 set by Australian Lisa Cuthbertson at the 2009 Games in Gold Coast, Australia. Just a few hours later the unstoppable Deirdre, a liver transplant recipient, went on to win the 100m Breaststroke swim in her age category (40-49 years).

Also an accomplished swimmer, earlier in the week (Tuesday) Deirdre retained her World Champion title in Transplant Sport title in the Squash event by winning Gold in her age category, her sixth consecutive World Games Gold in the Squash event.
After her race today, Deirdre said, “I didn’t realise I was swimming so fast. Two world records and four gold medals this week, I’m ecstatic! I smashed all of my personal bests too. I’m thrilled with my performance. Thanks to Otter Swimming Club and Dublin Swimming Club for their support, coaches Matthew MCusker and Brian Conroy and also Hamish Barrie and Claire O’Dwyer for their support.  A special thanks also to my dad and my sons for their loving support and especially to the family of my donor for making all this possible.”

As her events have now come to a close Deirdre can now bask in the glory of clinching four World Champion titles in 2017 while cheering on some of her other teammates from the Transplant Team Ireland who will be taking part in tennis, a golf team event and athletics over the coming days before returning home to Dublin airport on Sunday evening, 2nd July. Thank you to speedo for supporting the swimmers of Transplant team Ireland.

The Irish team of 27 athletes are competing among close to 1000 transplant recipients form over 50 countries. Every athlete at the World Transplant Games will have already received a kidney, liver, heart, lung, pancreas or bone marrow transplant.

The Irish team includes four newcomers. Although the main objective for team members is to embrace life and promote organ donation, some returning team members are also contesting World titles. Keen to build on their medal successes at the previous World Transplant Games in Argentina in 2015, Deirdre Faul, Kieran Murray, Tony Gartland and Peter Heffernan have  trained hard for the Malaga games.  Between them, the much smaller team of four won 13 medals including 7 Gold, 4 Silver and 2 Bronze in Argentina.  Two years previously at the World Transplant Games in Durban, South Africa 2013, the Irish team of 24 athletes scooped 34 medals including 12 Gold, 10 Silver and 12 bronze with 50 competing countries.

The Irish Team  will return home on Sunday 2nd July and their Ryanair flight is expected to land in Dublin airport at 17.30 hours.  An informal homecoming reception by family, friends and supporters will take place in the Arrivals Hall (Terminal One) as the team are expected to come through after collecting baggage at approx. 18 hrs.

NOTE:   Transplant Team Ireland’s return flight on Ryanair is expected to land at Dublin airport Terminal One on Sunday July 2nd at 17.30 hours. An informal homecoming reception by family, friends and supporters will take place in the Arrivals Hall (Terminal One) as the team are expected to come through after collecting baggage at approx. 18 hrs. Photographer Conor McCabe will be covering this homecoming event (no repro fee) tel. 085 7057255