Tara, Jack, Mike and James were in action today. As with every venue and every aspect of this year’s Games the spirit at the athletics venue was one of warmth and friendliness as we were all united in one goal – the celebration of the Gift of Life through sport.

Mike, a regular at the British Games, started us off in shot putt and he came away with the SILVER MEDAL. Mike is an established competitor with a great reputation in the field events. 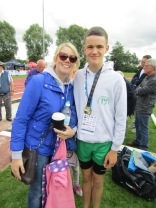 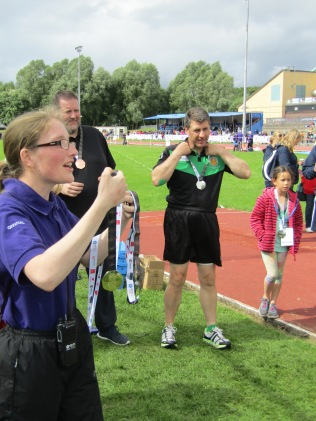 Tara followed up and won her heat in the 50m with ease. What is wonderful about Tara is that she competes with a smile on her face. It is evident that she is really enjoying what she is doing.

Jack took on the 100m final with confidence and though pushed for the majority of the race he powered away at the end to win the GOLD MEDAL. Jack has natural talent in bucket loads and we will be watching his development in sports with a keen interest in the coming years.

Tara and Jack both competed in long jump. Having both taken gold in the 3km yesterday and both taken gold in their respective sprints earlier in the morning it was only fitting that they both took GOLD in the long jump too! Both displayed natural talent for the event and it is great that they are both interested in a diverse range of events at their age – there will be time for them to specialise in future years.

Mike’s next event was the javelin and despite a delayed start it did not upset his rhythm and he took a good BRONZE in the event. Being involved in all three throwing events it is important to ‘mind’ your body through each one so that you are able to take on each discipline at the best of your ability. Mike has plenty of experience and with Dee at his side he is in good hands.

Jack was back on the track for the 200m. Buoyed by his wins in the 100m and long jump he knew that he could give the event 100%. I think that Jack is very suited to the 200m as it brings together his natural speed from the 200m with a little of his endurance from the 3km. Good technique was evident going down the home straight as he powered away to another victory and a 4th GOLD medal for his collection!

James Nolan was keen to take on the 400m, a long time favourite of his. As always, James’ attention to detail ensured that he was suitably warmed up when his event was called. He ran well down the back straight, kept himself in contention around the top bend to put himself in a position to push the race leader, Ernesto Antonio (originally from Galway) all the way to the line. The SILVER medal he came away with was well earned from a smart approach to the race.

Keen to enjoy the buzz of the day further, James managed to get himself included in a scratch relay team and he ran a strong 2nd leg to keep his team in contention in their heat.

Our final medal tally for the Games for both our teams was:

And so ended our competitive involvement in the 40th British Transplant Games. Having first attended a British Games in 2007 (in Edinburgh) I think that I can say that this year’s Games have been my personal favourite. It was down to excellent organisation and a wonderfully friendly atmosphere. The organisers should be proud of what they achieved. The event itself was clearly enjoyed by the participants and it was used very effectively to get the message out about what can be achieved post transplant and the importance of the general public discussing organ donation and making a clear commitment to saying YES to making a difference.

The value of transplant and dialysis sports event is that the competition gives a focus for training throughout the year and the friendship and good-natured rivalry offers something to look forward to each time.

We are having an ‘open day’ in the ALSAA Sports Complex on Sunday August 27th and I encourage anyone interested in getting involved in what can be a life affirming and transforming experience to come and say HELLO on  the day!