Jamaican native Travane Morrison, who is understood to be one of the fastest 100m sprinters in Ireland as well as being a Masters student at the Institute of Technology, Tralee, is looking forward to gaining some insight into Transplant Sport as part of his studies when he attends the 10th European Transplant & Dialysis Championships in Sardinia with 24 members of Transplant Team Ireland.

Travane will be an enthusiastic supporter of Transplant Team Ireland and spectator at the week-long European Games which will involve transplant and dialysis athletes from over 25 countries and will take place from 17th – 24th June.

The 25 year old is an accomplished sprinter and trains at Tralee Harriers.  While attending college in Jamaica he won an UNESCO scholarship to study for 18 months at Tralee IT where he is currently doing a Research Masters on the positive effects of exercise and medication following kidney transplant. 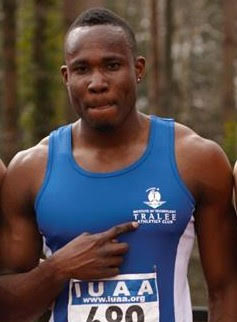 Travane is the current title holder of the the Irish University Challenge for the 100m sprint with what is understood to be one of the fastest times in Ireland this year with a time of 10.48 seconds at this event.

As 24 members of Transplant Team Ireland fly out to Sardinia on Saturday 16th June, Travane will be warming up to run in the Le Chéile International Championships in Leixlip, Kildare which takes place on the same day and where he will be Captain of the World Athletics Team. Later that evening he will fly out to Cagliari to join the inspirational Irish team of transplant and dialysis athletes at the week-long games.

Speaking from Tralee a week before joining the Transplant Team Ireland, Travane said, “I am very interested and excited about attending the European Transplant & Dialysis Sports Championships with Transplant Team Ireland. It will assist me greatly with my Masters research and in gaining a better insight into the role of sport for transplant recipients. Also I am looking forward spending time with these inspirational people who have experienced organ failure and are enjoying life through participation in sport. I’m a sprinter so even more than just for research it should be fun to watch the competition and get to know all the participating athletes.”

When he returns from Italy, Travane’s focus will turn to his training for the GloHealth Irish Senior Track & Field Championships which will be held in Santry in July.