Transplant Team Ireland got off to a great start in the first day of week-long competition at the 10th European Transplant & Dialysis Sports Championships today (Monday) in Sardinia winning 2 Gold, 1 Silver and 5 Bronze. The Irish team spent their first full day yesterday (Sunday) acclimatising to the hot weather and familiarising themselves with their beautiful surroundings on the picturesque coastal host city of Cagliari.

Today members of the Irish team showed their mettle by securing 2 Gold medals in the Darts (singles) events and its Darts Triples team came third winning three Bronze at the Hotel Setar. At another venue, the City Track in Cagliari, other Irish team members were rewarded for their 5km races with a Silver medal as well as 2 Bronze medals.

The Irish fared exceptionally well in the Darts singles competition where two Gold medals were seized by veteran to the team Charlie Ryan from Cobh and newcomer to the Irish team Verina Borissova, a Bulgarian native who lives in Tallaght, Dublin.  Liver transplant recipient Charlie Ryan who is in his seventies, defended and won his six in a row Champion Darts title having won Gold at every biennial European games since 2008. Dubliners Paul Prendergast from Santry and Harry Ward (the Team captain from Baldoyle) as well as Clare woman Marie O’Connor competed well together in the Darts Triples event before being beaten by a Hungarian team in the semi-finals and they each received a bronze medal for coming in third place.

Despite the early morning heat up in the late 20s, Transplant Team Ireland put in great performances in their 5KM races, with the first medal for the team, a Silver, won by Nenagh woman Sheila Gregan. Her teammate Kilkenny native Emma O’Sullivan (living in Glin, Limerick) was awarded a Bronze medal and her personal best time in the same race while Kieran Murray from Ramelton, Donegal was also rewarded for his strong performance with a Bronze medal in his 5km race in the 30-39 year age category.

Triathlete Sheila Gregan, a kidney transplant recipient, delighted with her win in the 40-49 year age category said, ”I’m absolutely thrilled to have won a Silver medal.  The fine weather at home has helped with the acclimatisation for here but it was very hot. Once I started the race I focused so I didn’t think of the heat, just the finish line. I want to thank the Nenagh Tri Club and my colleague Eileen Carroll as she’s been a great motivator and support in the lead up. Of course I want to echo the sentiments of the whole team in saying that we’re here because of our donor and donor family. I wouldn’t be here otherwise and I’m extremely grateful. My sisters, Liz and Mary, are here supporting me and it was great to have them at the sideline and to witness me winning Silver. I am really looking forward to taking part in Swimming tomorrow and in the 20km Cycling event on Wednesday.”

Stephen Byrne from Tralee was placed fourth in the 50-59 years age category narrowly missing out on a Bronze by just three seconds and achieving his personal best. The kidney transplant recipient said, “I have to thank my donor, I wouldn’t be here without them. A big thanks to my club in Tralee, Born to Run and Tralee Park Run”.

Kieran Murray said “I’m delighted to win a medal after all my hard work and training. I want to thank everyone including my sponsors, family, my club Milford AC especially James Gibbons and Seamus Ferry and of course my donor without whom it wouldn’t be possible.”

Emma O’Sullivan, two-time kidney transplant recipient and mother of one, said “I’m delighted with the result I achieved a personal best time. I would like to thank my donors and their families as if it wasn’t for them I wouldn’t be here today, and I’d like to thank the team at CH Health & Fitness in Glin.”

Charlie Ryan, in his seventies, was defending his six in a row European title and faced strong competitors.  In the Darts match final against a Slovenian he secured victory. He said “I am delighted with six in a row, unbeaten. The game is getting tougher and tougher as the standard gets higher each year, but my practice pays off. I practice nearly every day. I’m thrilled with the result.”

Verina Borissova, who underwent a combined kidney and pancreas transplant, has returned to dialysis treatment said, “I am delighted with the result today and my practice has paid off. I competed against a Slovenian in the final and she was a great player and it was a very challenging game. I really want to thank my previous donor and of course my future kidney donor as I am awaiting a transplant. The Irish team has helped me and supported me today. They are brilliant people. I am really looking forward to competing in my next event, Petanque, on Wednesday.”

Team Captain Harry Ward spoke of his delight in winning a Bronze in the darts triples event and said, “I’m shocked and surprised but absolutely delighted. Well done to my team members Paul and Marie and to all the supporters. It was a great event.”

Also representing their country today was Dubliner Lenny Ryan from Tallaght and Michael Keohane from Roscarbery in Cork who took part in the Darts Triples competition with triples teammate and Gold medal winner Charlie Ryan.

Later in the day the 23-strong Irish team attended the Games Opening Ceremony held in Santoru, Athletic Stadium along with the 25 nations participating in this years Championships. Team  Ireland members Aoife Murray from Dublin, and Mullingar native Finian Farrell proudly flew the Irish flag on behalf of the team.

The Irish team of 10 women and 13 men ranging in age from 31 to 80 and includes 20 athletes who underwent kidney, pancreas or liver transplants as well 3 athletes that are receiving Dialysis treatment. The European Transplant & Dialysis Sports Championships are a celebration of life and showcase the value of sport and regular physical activity for people on dialysis and transplant recipients.

Team Ireland will be tomorrow competing in the Tennis and Swimming Events and are all looking forward to the week ahead.

For more information on the 10th European Transplant & Dialysis Sports Championships and the Irish athletes visit the team blog www.transplantteamireland.wordpress.com or visit the Games website http://www.cagliarietdsc2018.it 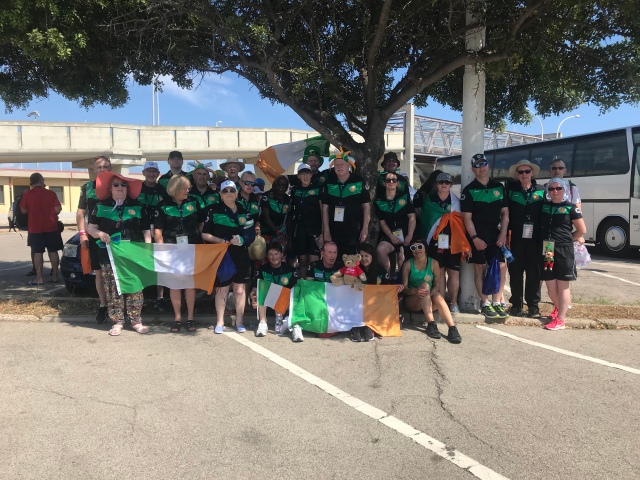