It has been a phenomenal week of triumph for Transplant Team Ireland at the 10th European Transplant & Dialysis Championships in Cagliari as they won a staggering 54 medals including 11 Gold, 20 silver, 23 Bronze. Twenty-three members of Team Ireland competed in intense heat and against strong competition this week on the sun drenched picturesque Italian island of Sardinia but braved through their challenges to victory. Long enduring friendships and memories were made and the positive spirit of the Irish shone through among the 25 participating nations. A sense of gratitude for life abounded with many of the athletes acknowledging their gratitude to their donors.

Retired urologist Ron Grainger, aka The Flying Doctor, from Castleknock, Dublin proved to be unbeatable winning Gold medals in three events – the 200m sprint, 100m sprint and the Golf Event for his gross score. Ron said, “I feel blessed to have been able to compete at this level and with this achievement. I think if my donor and how this would not have been possible without them.”

Kieran Murray from Ramelton in Donegal, also was victorious at the track and field events. On the final day of competition, Kieran won a Bronze in the 800m race, the kidney transplant recipients, fourth medal at the Games. During the course of the week-long games Kieran also won a Gold medal for Golf , a Silver in the 1500m sprint and Bronze in the 5km walk.

Kieran said, “I am delighted with my medal and indeed the medal haul I achieved throughout the week. It has without a doubt exceeded my expectations. Being here is a huge honour in itself so to bring home any medal is a success for me. A big thank you to Milford AC for supporting me and putting me through my paces in the lead up to the Games and to my family and friends for all of their support back home. Indeed, I would also like to thank my donor who is always in my thoughts. My main aim at the Games is to promote organ donation and show how it transforms and save lives.”.

Deirdre said, “It was a challenging schedule and there was some stiff competition but I am very pleased with how I swam. I want to say a big thank you to Swim Ireland for all of their support this year in helping the team and myself improve times and I look forward to working with them again in preparation for the World Games next year. I also want to thank my donor and donor family for making the decision to donate.”

The entire Team Ireland Golf Team swept the decks winning 3 Gold and 2 Silver medals. Eldest Team Ireland member and eldest overall competitor at this years Championships, John Mc Aleer (from Newtownabbey, Antrim) was one of these successful Golfers, taking the Silver for his net score. A day before the retired university lecturer won a Bronze medal in Petanque event.

Games Veteran Charlie Ryan, a liver transplant recipient from Cobh, Co. Cork retained his decade-long title as European Transplant & Dialysis Champion in Darts, winning Gold. Charlie, a retired skipper, who competed in the 70+ age categorydefended and won his six in a row Champion Darts title having won Gold at every biennial European games since 2008.

Another Team Ireland athlete who also successfully defended a European title was Marie O’Connor (Lahinch, Clare). Marie remained the undefeated European champion in the female golf event securing the Gold in the Golf Gross category. Marie has won Gold in Golf at every World and European Championships since she began competing with Team Ireland with the exception of the World Games when they were held in Argentina which she didn’t attend. Marie also enjoyed success off the golf course by winning a Silver in the 100m sprint, Bronze in the Darts triples event and Bronze in the Petanque Singles event. Marie reflected that her donor is her true “gold prize”.

Wife to Team Ireland Manager Colin, Chikoyo White won 2 Silver and 1 Bronze medal this week in her Bowling and Pétanque events . At the Closing Ceremony and Gala Dinnner last night in Hotel Setar Chikoyo was awarded highest achievement in the Female Dialysis category, a tremendous achievement for Chikoyo who has been on Dialysis for the Past 17 years.

Chikoyo said, “I was delighted to get this award, it’s been a brilliant week here in Sardinia. I’ve truly enjoyed this week of events, and being here with the team. The Irish team are friendly, warm and always fun to be around.”

Also receiving special mention at the closing ceremony last night were Charlie Ryan and John McAleer, as they were both amongst the eldest participants proving that age is no barrier.

At this ceremony, Team Manager Colin White gave an excellent presentation on the next European Championship which will be held in Dublin in 2020.

On hand to support the team throughout the week were Team Manager Colin White, Team Captain Harry Ward, Doctor Heather Gunning and Chief Executive of the Irish Kidney Association Mark Murphy. At the Team Meeting in Hotel Setar on the penultimate day of competition Colin reflected on the team spirit he witnessed throughout the week at all events, he said, “It’s been a tremendous week. My job has been made easier as our Irish athletes have been on the ball, , ready for their events and also ready to cheer on fellow team members. Each time an Irish athlete was announced for a medal or participating in an event, the screams and whoops of the supporting Irish could be heard above everyone else.“

Following the closing ceremony Colin reflected on the week saying, “I’m so proud of Team Ireland for all of their successes but most importantly I am tremendously proud of the team spirit that I have witnessed here. The bonds that have been made here will endure the years. I also would like to give special mention to Team Captain Harry Ward, he has played a blinder, he is so well recognised by everyone and a friend to all. Everyone knows Harry, including not just our team but all the other teams, team managers, local organisers etc. and look to him for support and guidance. Mark Murphy has been a huge support and always on hand to get people where they need to go and deal with any hiccups that arise. Heather, the doctor has ensured everyone remained hydrated, safe from the sun and generally well throughout the week.”

Team Captain Harry Ward, from Baldoyle, also commented on the team spirit that he witnessed amongst Team Ireland, he said, “I am very proud of how the team has gelled this year. Everyone has supported everyone else and the Team has been like one big family. It’s been a truly fantastic week.”

Jamaican Champion sprinter Travane Morrison, who is understood to be one of the fastest 100m sprinters in Ireland, attended the Championships this year with Team Ireland to observe the Irish team for his Masters Research at IT Tralee. At the end of the week, Travane said, “the European Transplant Games is no different from regular sporting events. It is governed by the same rules and the standard is very high despite the health challenges that the athletes have faced. It’s been a really fun week, the team are great people to be around, the way they appreciate life and have fun is inspirational.”

The Irish team of 10 women and 13 men range in age from 31 to 80 and includes kidney, pancreas or liver transplant recipients as well 3 dialysis patients.

A homecoming reception for Transplant Team Ireland will take place at Dublin airport’s arrivals hall (Terminal 1) when the team arrives home on a Eurowings flight from Dusseldorf today Sunday 24th June around 3.15pm.

The Irish Kidney Association is looking forward to bringing the biennial European Games back to Ireland in 2020 after it successfully hosted the 6th European Transplant & Dialysis Games in Dublin in 2010 which attracted over 500 participants and supporters from 23 countries.

For more information on the 10th European Transplant & Dialysis Sports Championships and the Irish athletes visit the team blog www.transplantteamireland.wordpress.com or visit the Games website http://www.cagliarietdsc2018.it

The full Irish panel is as follows:- 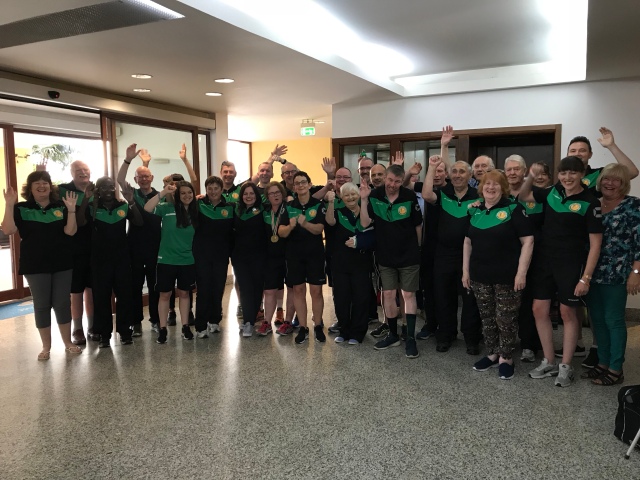